“Wait!” said Todd. “The screens aren’t broken! They are only unplugged!”

"Great," I said, "Now we can watch the tapes and see who stole the presents!"

I was amazed at Todd’s detective skills. I didn’t think to check the plugs… 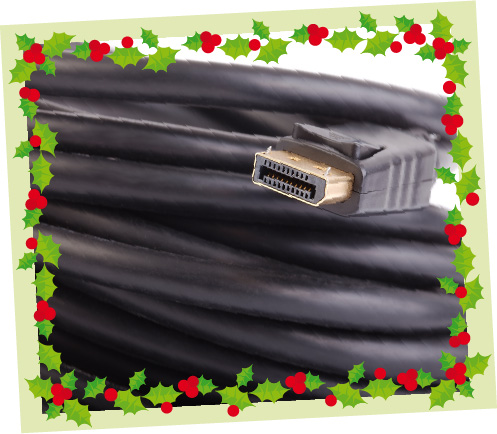 Who would have unplugged the screen? Who would have been able to do that? Was it like that before we walked into the room, or did somebody do it while we were standing together in the room?

As Todd picked up the plug, showing it to the room, I looked at the three major suspects that Todd and I had suspected of being the thief.

The Mall Manager, the 3 Elves, and the Janitor... Even the Security Guard looked nervous. Everybody looked nervous. We all knew that we we were about to see who stole Santa's gifts.

Finally, Todd walked toward the socket the plug, and was about to put it into the wall.

Who do you think stole the gifts?

All of the sudden, a man dove across the room, yelling “Noooooooo...”

It was a real blur, it all happened in the blink of an eye!

He crashed into the wall, missing my brother, and the plug...

It was Frank, the Security Guard! Lying on the ground, his face was stained with chocolate.

He tried to dive to stop Todd from plugging it in, but he missed, and went crashing into the wall. His crash made the closet door open, and lots and lots of presents fell out of the closet.

“The presents!” cheered the 3 Elves! “Christmas is saved! Santa won’t be mad at us! Hallelujah!”

The Mall Manager walked up to Frank.

Frank began to cry. He told us that he stole the presents because he had no money to buy presents for his friends and family. He had spent all of his money on chocolate donuts.

The Mall Manager was angry and fired Frank from his job as a Security Guard. We all felt very sad, and the 3 Elves gave Frank a hug.

They offered him a job as an Elf, and told him that they would help him eat healthy food. He would be paid in presents to give to his family, and not money. This way, he could not spend more money on donuts.

Everybody was happy, except the Manager.

We left the room, and found our mom. She took us home for a delicious Christmas dinner with our family and friends!