The Case of The Missing Slippers

Paisley peered out her window at the gray sky and wondered if the day was as cold as it appeared. When she placed her feet on the floor, her toes curled upon feeling the cold wood beneath her feet.

Immediately, Paisley decided she needed her fuzzy penguin slippers to keep her feet warm. The trouble was that she had not seen her slippers in a week! 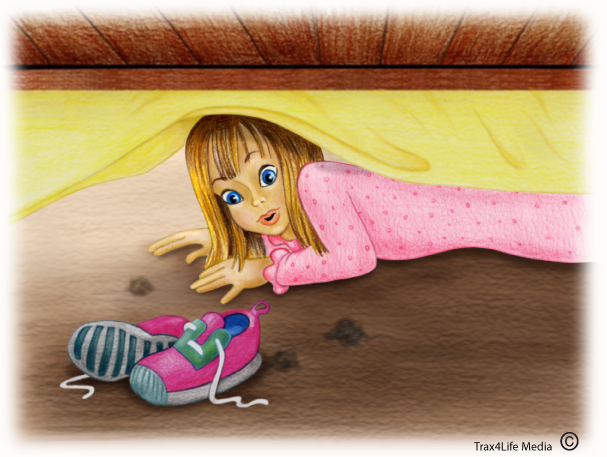 Kneeling on the floor she looked under her bed, but all she could see was dust bunnies and tennis shoes. After she was sure the penguin slippers were not under her bed, she began to search through her closet.

She looked through her toy bin, she searched through her shoe rack, and she even stood on her tiptoes to peek on the top shelf. Her penguin slippers were nowhere to be found.

To solve a mystery, sometime you need help!

Clearly, Paisley needed to seek help from an expert, and the expert slipper finder of the house was none other than her mother. Whenever there was a mystery to be solved, her mother was on the job.

Paisley walked down the stairs on her very cold feet, and found her mother folding laundry in the living room.

In this story Paisley blamed her brother for taking her slippers without really knowing who took them.

Do you have what it takes to find out who took the slippers?

When Paisley came into the room, her mother had just finished folding the last pair of pants. Paisley’s sister Maura and her brother Garrett were also in the room, sitting on the sofa watching cartoons.

Even Paisley’s dog, Aubie, was there slobbering on a bone near the fireplace. Paisley began to explain to her mother about the missing slippers.

Paisley is now about to gather some important information!

Paisley’s mother asked her when she had lost her slippers.  She answered that she had not seen them since Monday, which was a week ago today. Maura overheard about the missing slippers and spoke up with some valuable information, “I saw Garrett wearing the slippers on Tuesday morning!”

At once, Paisley reacted to the newly revealed evidence. “Give me back my slippers, Garrett!” Paisley demanded, but Garrett insisted he put them back in her room before he went outside to play that day.

She questioned him further, and he admitted seeing Maura with the penguin slippers on Thursday. Paisley moved on to her next suspect.

"Perhaps, you should be less hasty in accusing your brother and sister for taking your slippers and look at the facts." “Maura, what have you done with my fuzzy penguin slippers?” yelled Paisley.

She was very rude, and assumed that Maura still had her slippers.

Maura explained that her feet had gotten chilly on Thursday afternoon, and when she saw the slippers next to Aubie’s dog bed she decided to put them on.

Paisley asked where Maura put the slippers after she had taken them off.

Maura said that she placed them underneath Paisley’s bed later Thursday night.

Still puzzled, Paisley turned back to her mother for advice.

Can you put this puzzle back together?

Paisley asked Garrett where he had found the slippers on Tuesday when he decided to put them on. He explained that they were in the kitchen next to Aubie’s food bowl. Upon asking hearing this, Paisley’s mother posed a question to Paisley, “Slippers do not walk by themselves, so who do you think has been taking your penguin slippers from your room, and who probably has them right now?”

Problems with the download??? Send me a note at This email address is being protected from spambots. You need JavaScript enabled to view it.