Can a kid like you solve this halloween mystery?

I love giving out candies, chips and chocolate bars to all the kids that come to our door. In fact, my friends were pretty upset when I told them that I would not be going trick-or-treating this year. It’s not that I don’t think trick- or- treating isn’t fun anymore, but my parents are both gone to a business conference out of town.

My older brother Rodney and I took our little sister trick-o-treating down the street earlier, but now that we are back home, he says he is too old to be giving candies at the door. 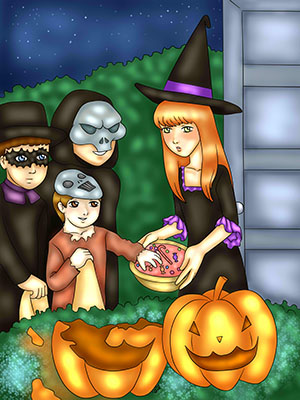 If you ask me, I’d say that he is too proud and scared that Carmen, that grade twelve girl that he likes, might see him talking to little kids. She lives fourteen houses down from ours. I counted them on my way to school.

Mom and dad knew they would be gone for Halloween and they bought some real cool stuff for me to give out. Better stuff than in other years. 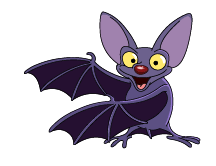 Makes me wonder if the parents felt bad for leaving us, and thought buying better treats would make up for ditching us. You know what I mean, not just cheap candies and bubble gum-- real chocolate bars and top quality chips!

The word quickly gets around with trick or treaters. You can hear them down the street; “Go to the green house with the two skeletons up front, they’re giving out tons of stuff!” or “Don’t bother going to 3073, they got their lights off and they aren’t answering the door.”

Nearly eight o’clock and things are finally slowing down. The younger kids and their parents have gone home. Now it’s more the older kids left, coming to the door. My little sister has been watching out the window and is now starting to get a little scared at times.

Gone are the pink princesses and unicorns. Older kids are into gruesome zombies and vampires these days. Lots of them spare no efforts on their masks and costumes.

I thought I would soon be done giving out candies. I had no chips left and if kids didn’t quit coming to our door soon, I’d be out of stuff anyhow. That’s when it happened. 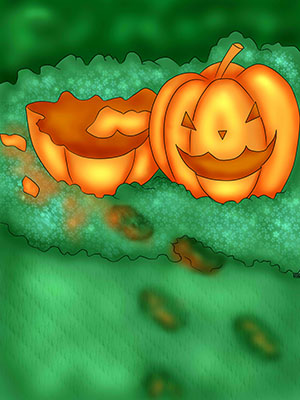 My little sister screamed at me, “Cassandra, a zombie just smashed the pumpkin you carved! He kicked it!” “WHAT?” “Are you serious?” I screamed Did I tell you that I spent hours carving the horses and carriage in that pumpkin? I won the pumpkin carving contest at the school with this pumpkin.

I spent hours planning and carving this pumpkin, with no help from my dad this year. My pumpkin was in the large flower bed on our front yard. I even weeded and watered the soil earlier so my pumpkin would stand out. I ran to the large living room window to see who could have done this, unfortunately, all I could see was a piece of my broken pumpkin rolling towards the street and three masked zombies/monsters coming up the staircase towards my front door.

I was fuming. How much of a jerk can you be?

They are coming to my door for the best of treats, yet one of those zombies just kicked my price winning pumpkin. I asked my little sister which one of the three zombies smashed the pumpkin. Regrettably, I found that my four year old sister was an unreliable witness.

“A zombie” she answered.

That much I could figure out. I started lashing out at the three zombies. I stepped forward towards them.

“Keep your cool Jasmine,” I told myself, but that only made me more upset.

Fortunately, my older brother stepped in and stopped me from…well from ripping these zombies masks apart at the very least.

Download this activity sheet to get a huge clue! He asked, “Okay zombies- which one of you three is the idiot who smashed our pumpkin?”

They all stood there silent. They looked like they were boys about 12 -13 years old.

The zombies were scarred to say the least. None of them spoke.

Whoever did this had not planned on a four- year- old alerting us.

My brother is nineteen and probably looked large and upset as well.

To my surprise, my brother kept his cool.

He asked again, “Which one of you smashed our pumpkin?” The zombies stood there silent. None of them would say. Were they too scared or just complete idiots? Perhaps they were real zombies-- I didn’t know. My brother said to them, “Okay, you don’t want to talk, but after what you did, don’t count on getting any treats here.

Best you kids leave right now before I tear your masks off!” What? Letting them go, before we find out who did this?

What was my brother doing?

My brother winked at me.

The zombies hesitated, looked at each other puzzled, then turned around and started down the staircase.

Their pace got faster down our sidewalk, towards the street.

I looked at my brother’s face.

He was looking at them up and down walking away when his face broke into a smile…and then he ran towards the purple zombie and said, “I know now that you’re the one who smashed my sister pumpkin. Let’s see your real face!”